During our first 2 seasons of Trekkit TV we filmed many great locations in New Brunswick, Canada.

Getting ready for our international version of the show, Trekkit Traveller, we headed out to get additional footage in our home province. We had added a new team member, a DJI Phantom quad-copter we call Vincent, to get aerial views of many of the places we were headed. 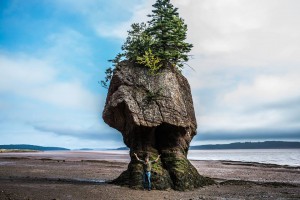 Our second adventure was to Hopewell Rocks, it was a first for some of the Trekkit adventurers. We arrived bright and early to film at low tide and to capture video before the tourists arrived. We were greeted by Kevin Snair and he gave us great tips where and what to film. The depth of knowledge of all the park staff has made a very interesting show, airing this spring. 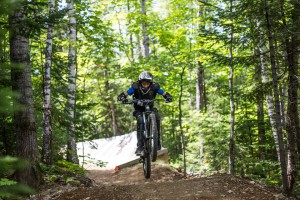 We were then off to do mountain biking at Sugarloaf Mountain. What an adventure! Some of us had never been to a mountain biking trail before; so we were excited. Sugarloaf set us up with an amazing guide and fitted us with the proper gear. There are trails for the new adventurers and seasoned adventurers. This is a must do adventure and a great way to spend the day with a group of people or on your own. It is a great way for older kids to get out of their comfort zone and try something new. You won’t be disappointed.

Next up, Grand Manan Island! We had travelled there before but this time we were greeted by geologist Greg McHone, originally from Connecticut.

We had no idea the depth of geology on this Island. Geologists come from all over the world as Grand Manan is like no other place in the world. We were able to capture some great videos with Vincent which shows the magnitude of the cliffs and beautiful landscape of this Island in the Bay of Fundy.
We also headed out to film aerial views of the waterfalls and other scenery in New Brunswick.

Thank you to the Province of New Brunswick for helping organize our film tour and the staff at each location was helpful and knowledgeable and enhanced the whole experience.

If you haven’t been to any of these places, it’s a must see. New Brunswick is filled with amazing scenery and it is just waiting for you to explore and create an adventure of your own.