Ryan and I went to Norway to explore the Western Fjords during the Summer of 2015.  We spent nine days exploring, filming, and taking pictures of the majestic landscape.  Our trip will be presented in six episodes during Season 4 of Trekkit TV, starting early March 2016 on Bell Aliant TV1.  However, it is difficult to tell the entire story in a few half-hour television episodes.  Therefore, I decided to write this 18 part blog series highlighting some of the interesting or entertaining aspects of the trip that might get left out of the TV version.  To watch the first episode in the series, click here.

The first day of the trip to Norway was spent traveling.  I departed St. John’s, NL and flew direct to London’s Heathrow Airport while Ryan traveled a few hours west from Fredericton, NB to Toronto and then switched directions to fly over the Atlantic Ocean.  We both had flights through the night – too bad that I cannot sleep on a plane.  Interestingly enough, they served a hot breakfast on the flight at around 1:30 am my time.  But since the sun was rising on the horizon, as we flew east, I suppose it made sense.

I arrived in Oslo early in the afternoon (local time), 4.5 hours later than what my watch showed.  After a short wait, Ryan joined me and we then flew the final flight to Stavanger on Norwegian Airlines where we checked into our hotel at the airport for a good night’s rest.

Stavanger is located on the coast at the southern limit of the Norwegian Western Fjords.  When planning the trip, I quickly realized that we wouldn’t be spending much time on the coast as the fjords are much more impressive further inland.

After a big breakfast consisting of an omelet and smoked salmon (very popular in Norway for breakfast) we picked up our rental car and headed inland.  The weather was good – sun and clouds with the temperature around 12 Celsius. 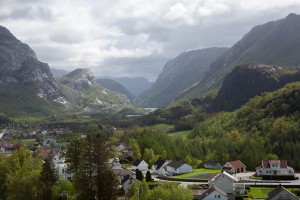 After only 30 minutes of driving we were officially in the fjords.  As we passed through the small community of Oltedal, the terrain transitioned quickly from gently rolling hills to narrow valleys with steep slopes.  This is what we came to Norway to see and we were only just on the edge of a fjord.  In 2009, the renowned National Geographic Traveler Magazine voted the Fjords of Western Norway the best preserved attraction on UNESCO’s World Heritage List!

Our first stop was a waterfall named Månafossen.  We were immediately greeted in the parking lot by a local resident of the area.   Highland Cattle are originally a Scottish breed suited to harsh environments.  They have long horns and long wavy coats.  This one seemed friendly enough but still looked a bit menacing standing in front of our small rental car. 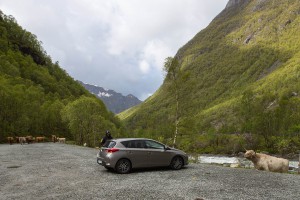 You can see the rest of the herd in the background blocking the road.

A short hike 20 minute hike up a steep slope was required to reach the viewpoint for Månafossen.   The first part of the hike required us to climb a rugged rock staircase but then the trail transitioned to smooth bedrock that required you to hold onto chain links held by poles bolted into the granite. 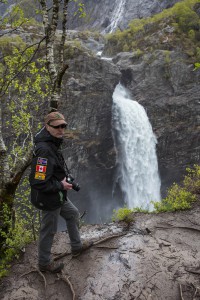 The falls were indeed impressive.   With a free fall of 92 m and the high flow rate from the spring runoff, the waterfall produced a loud roar.  Månafossen means “Moon Falls” and is pronounced “MOH-nuh-foss-un”.  Many of the waterfalls in Norway have been tapped for hydropower, Norway’s main source of energy generation.  Norway produces approximately 99% of its electricity from hydroelectric power, more than any other country in the world.  However, this waterfall is unregulated and flows unrestricted as nature intended.  The viewpoint is opposite the falls and you stand at the edge of a vertical drop that is at least 100 m straight down.   I am only standing about 1 foot from the edge – watch your step! 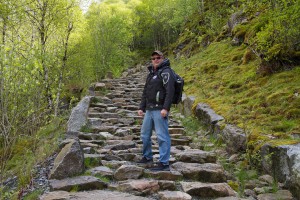 Stay tuned for my next post when Ryan and I decide not to visit a small community that requires you to climb 4444 steps to reach the village.

To stay up to date on all new Trekkit videos and blogs please sign up for our The Trekkit Newsletter!